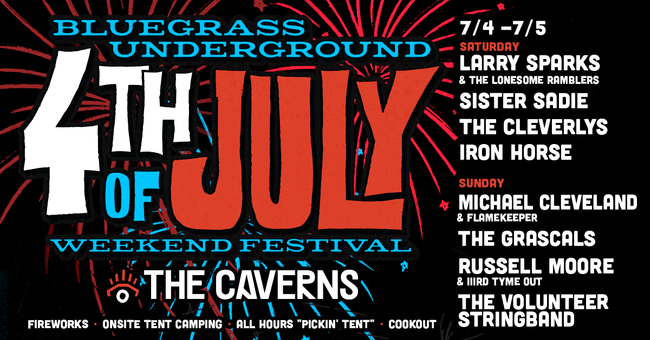 UPDATE (4/1/2020): The Caverns first priority is to ensure the safety of its patrons, performing artists and employees and due to concerns about the coronavirus, The Caverns and the scheduled performers have made the decision to cancel this festival. All purchased tickets & packages will be fully refunded. We are looking forward to hosting you underground for another show in the near future and appreciate your understanding.

All American Weekend of Award-Winning Bluegrass Music in a Breathtaking Subterranean Venue, Plus Cookout, All Hours Pickin’ Tent, Fireworks and Onsite Camping

As first reported by Bluegrass Today, The Caverns is proud to announce Bluegrass Underground 4th of July Weekend Festival. The inaugural festival is a 2-day music event celebrating Independence Day with world class music in one of the country’s most beautiful venues. The weekend will feature a cavalcade of hard-drivin’ bands including Michael Cleveland & Flamekeeper, The Grascals, Russell Moore & IIIrd Tyme Out, Larry Sparks & The Lonesome Ramblers, The Cleverlys, Sister Sadie, Iron Horse and The Volunteer String Band.

All performances will take place underground on The Caverns stage. Above ground, guests will enjoy cookouts each day, an all hours pickin’ tent, evening fireworks, and—for the first time ever at The Caverns—onsite camping! “Stay and Cave” packages are also available for guests who want the comforts of nearby lodging with transportation to and from the venue each day, plus commemorative merchandise and more.

“The Caverns has grown so much since we first opened in 2018. We’re excited to open our campgrounds and welcome music fans for a full weekend of nothing but Bluegrass music,” said Todd Mayo, Bluegrass Underground creator/co-producer and The Caverns owner.

Enjoy nature’s air-conditioning! In Pelham, TN, with an average high temperature of 92° in July, the cool cave temperature of 59° inside The Caverns will come as a relief for music fans looking to escape the hot summer heat of July 4th weekend.

Larry Sparks & The Lonesome Ramblers - Larry Sparks, IBMA Hall of Fame member, began his career in the mid-60s as a guitarist for the Stanley Brothers and, over 50 years later, he’s among the most widely known and respected touring musicians in bluegrass and gospel music today.

Sister Sadie - The GRAMMY-nominated group Sister Sadie is made up of world-renowned musicians Dale Ann Bradley, Tina Adair, Gena Britt & Deanie Richardson, who originally formed after playing a sold-out 2013 show at the legendary Station Inn in Nashville. They’ve been turning heads ever since.

The Cleverlys - The Cleverlys are a one-of-a-kind comedy/music blend coming from the remote part of the Ozark Mountains, near Cane Spur, Arkansas. The New York Times wrote, "If Earl Scruggs, Dolly Parton, and Spinal Tap spawned a litter of puppies, it would be the Cleverlys.”

Iron Horse - Well known for their exceptional musicianship, skill and ability to transpose Metal to Bluegrass while maintaining the identity of the originals, when Iron Horse takes the stage, get ready for mind-blowing Bluegrass renditions of Metallica, Ozzy Osbourne, Led Zeppelin, Van Halen and many more hard rock bands.

Michael Cleveland & Flamekeeper - A 2020 GRAMMY winner, Michael Cleveland, is a former child prodigy who picked up the fiddle at age 4. At 9, Cleveland sat in with none other than Bill Monroe. Before turning 14, he brought his virtuosic style to the Grand Ole Opry as a guest of Alison Krauss. “He plays fearless,” says Vince Gill.

The Grascals - With a career spanning over 15 years, The Grascals have 3 GRAMMY nominations and 2 International Bluegrass Music Association (IBMA) Entertainer of the Year awards. They’ve made late-nite TV appearances and frequent guest appearances on the Grand Ole Opry.

Tickets for Bluegrass Underground 4th of July Weekend Festival go on sale Friday, February 14 at 10a CT at www.thecaverns.com. Single day reserved seating starts at $60. With a 2-day reserved seating and 2-day packages, guests will have the same great seat for each day of the festival.

Get your bluegrass underground!